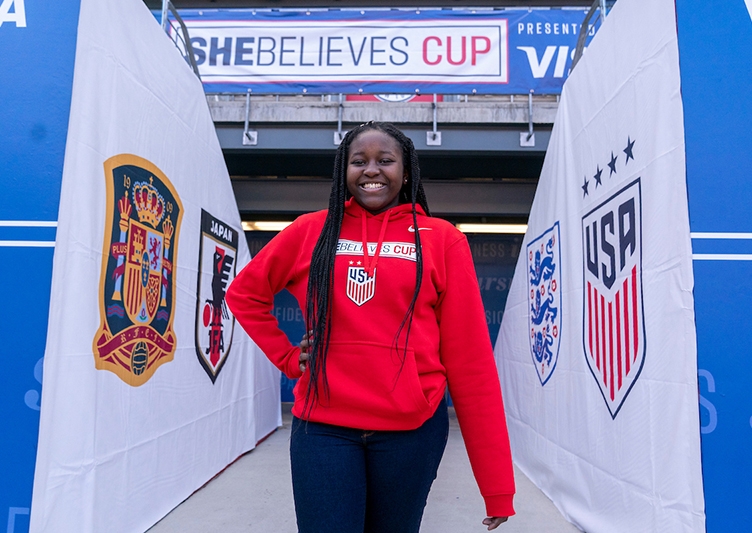 On a quiet Sunday night, Semahj Ware sat at her kitchen table waiting for a call she hoped would bring good news. “Until the moment the phone rang, I still wasn’t confident in myself or that I won,” says Semahj.

SheBelieves Hero is a national contest by U.S. Soccer to find stories of perseverance and leadership of girls between the ages of 13-17 making a positive impact on their community. Semahj, formerly a student and now volunteer, was nominated by Operation Breakthrough through a 60-second video on Twitter. After a selection committee narrowed down the largest field of submissions in the history of the contest to five finalists, the decision was left up to the general public to vote for the winner.

Less than two weeks later, Semahj was on her first plane ride to New Jersey. “I was nervous and scared when the plane took off, but I realized it was like a car ride in the air,” explains Semahj.

When she arrived at the hotel, Semahj found her room filled with special gifts to welcome her, including USWNT gear to wear to the game. “They even got me Russell Stover which is my favorite candy. I was on a chocolate overload the whole weekend.”

The night before the game Semahj attended the team’s training session. When the team walked out of the tunnel to begin training, it was a surreal experience seeing the World Cup Champions in person. “I was nervous but the whole team made me feel welcomed and inspired,” Semahj says.

After training, Semahj ventured into New York City to explore where she one day hopes to open a bakery. “Times Square was magical seeing all the lights and people. It was very new to me. I was just really amazed at everything going on around me”

Before the game, Semahj was honored on the field and walked out with the team carrying the game ball. “I know I submitted a video for the whole United States to see, but walking out with the team in front of 20,000 + people was the most nerve-wracking part of this whole experience. When the crowd cheered me on, it was an overwhelming moment.”

One of the unforgettable moments for Semahj was her interaction with Julie Ertz, 2019 U.S. Soccer Female Player of the Year. “Julie was sweet and told me she was proud of what I was doing. Then the next day, she scored the game-winning goal. After the game, she came up to me and asked how I enjoyed my first soccer game. Just for her to remember after such a big moment meant a lot,” Semahj explains.

If Semahj had to pick her favorite moment of the trip though, it was the time she spent with Lindsay Horan. “She took the time to know my story before meeting me, so it was like I was talking to a friend. Lindsay told me she would be the first one in line when I open up a bakery. She just made me feel very special and encouraged me to continue to reach for my dreams. I will never forget my time with her.”

Semahj was overwhelmed by the support of the Kansas City community and beyond. “A million times thank you to everyone who supported me and listened to my story.”

From her experience as the SheBelieves Hero, Semahj has grown in self-confidence. “Overall, I am proud of myself and I will continue to do my best in anything I set my mind to,” concludes Semahj.